While you were sleeping

We each spend about 25 years of our life asleep.

Intuitively, we know it as a period of rest for tired bodies and overworked minds. Until recently, science had a similar view, seeing it as a largely passive state when our brains and bodies shut down to recover.

That understanding is changing. Using increasingly sophisticated brain scan technology, researchers have discovered that sleep is, infact, a highly active time – a period of synthesis and recalibration that’s responsible for how well our brains perform across multiple domains.

In his new book, Why We Sleep, Matthew Walker, Professor of Neuroscience and Psychology at the University of California, Berkeley, lifts the lid on these developments, telling sleep’s story in a well-written and fascinating read.

As well as sharing his contagious enthusiasm for Mother Nature’s engineering, Walker raises serious questions about how we sleep today. He also points to the opportunities for improved cognitive and decision-making performance that are only a pillow away.

It’s a kind of magic

Sleep is universal. Without exception, all animal species sleep, or do something very like it. Even bacteria have active and passive phases that correspond to the light and dark cycle of our planet.

It is NREM sleep that helps us build our memories, emptying the cache of short term memory stored in the hippocampus and moving it to a more permanent home in the cortex.

But it is REM sleep, more commonly recognised as the period during which we dream, that drives the real “informational alchemy” so important to how our brains analyse and consider complex information.

During REM sleep our brain processes the vast amount of information that we have taken in during the day, building overarching connections and insights overnight. (That experience of waking up in the morning with the solution to a previously intractable problem? That’s REM sleep doing its thing).

REM sleep is also responsible for the recalibrating and retuning of our emotional IQ, increasing our ability to understand and navigate our emotions as well as those around us.

The right dose of this cognitive cocktail has a powerful effect – enabling the human mind to judge highly complex environments and ‘large world problems’ with a sophistication that is beyond more artificial forms of intelligence.

You’re not getting enough 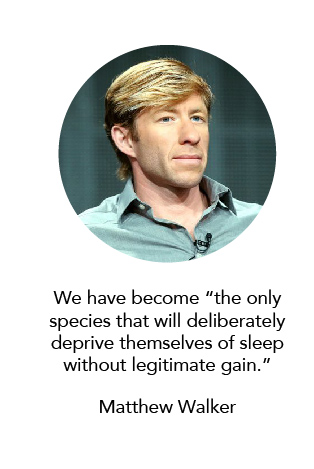 Walker warns us, however, that this exquisite engineering is very sensitive: Sleep six hours or less and we short change our brains of sleep’s benefits.

Indeed, even if we can’t nap during the afternoon (something our bodies are programmed to do), nearly all of us should be aiming for 8 hours sleep per day. This applies whatever our genetic chronotype (ie whether we’re larks or owls).

From a neuroscience point of view, this is serious stuff. Walker points out that whilst human evolution has benefited enormously from a greater proportion of REM sleep than other animals, we have become “the only species that will deliberately deprive themselves of sleep without legitimate gain”.

Significantly, poor sleep habits affect not only the overnight processing of information, but also how well we react and make decisions during the day.

“When tired, we are more likely to make impulsive, emotionally-driven decisions and to succumb to our biases.” says Dr Nicholas Beecroft, performance expert and leader of Essentia’s Decision Deep Dive Workshop.

Brain scans of sleep-deprived people reveal amplification in the amygdala – the part of our brain responsible for those primitive fight or flight instincts at the heart of so many unconscious behavioral biases.

Well-slept, our amygdala is balanced by the influence of the prefrontal cortex, the “CEO region” of our brains that is responsible for rational, ordered thought and problem solving. Start sleeping poorly, however, and this fragile balance is upset, with our higher order cognitive skills soon giving way to “a primitive pattern of uncontrolled reactivity”.

As it advances, sleep science is exploring more granular aspects of decision-making. 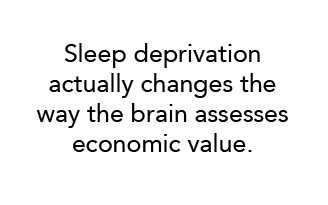 Research has found that despite short term adrenalin boosts or the heightened effort we may make when we’re tired, sleep deprivation can quickly lead to inflexibility of thought processes, poor communication, and a diminished ability to make good decisions when under pressure or faced with unexpected change.

One interesting study from Duke University (2011) found that sleep-deprived people tend to evaluate risky decisions with too much optimism.

This had historically been attributed to the known impact tiredness has on attention, memory, and integrating feedback. Instead, using an MRI scanner, the researchers found that sleep deprivation actually changes the way the brain assesses economic value.

A night of sleep deprivation leads to increased brain activity in brain regions that assess positive outcomes, while decreasing activity in those that process negative outcomes.

This confirms what casinos have known for many years: that flashing lights and free alcohol will encourage us to stay later and make riskier bets. It also explains the research into online gambling that showed an increased average wager between 3am and 6am. 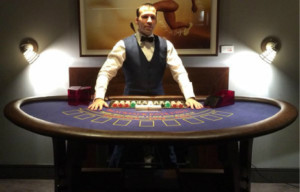 Maybe this doesn’t affect you?

Denise Shull, renowned Wall Street investor coach, says that whilst she often recommends getting more sleep to her trader and fund manager clients, it’s not usually taken as seriously as other aspects of self-care such as diet or exercise.

“The idea that less sleep is better is still pervasive”, says Shull; we put off going to bed early or making time for sleep “because we think other things are more important. We think we will manage.”

Rick Rieder, BlackRock’s Global Fixed Income CIO, recently joked in a recent interview with the Financial Times that “I am not a believer in sleep. It is a waste of time.” Known as early riser, Reider starts his day at 3.30am and survives on four hours’ sleep a night.

A recent survey of sleep patterns in financial services by eFinancialCareers reveals that he is probably not alone in his view. 33% of hedge fund professionals said they sleep less than five hours a night. Only 11% said they were exhausted or strung out as a result. 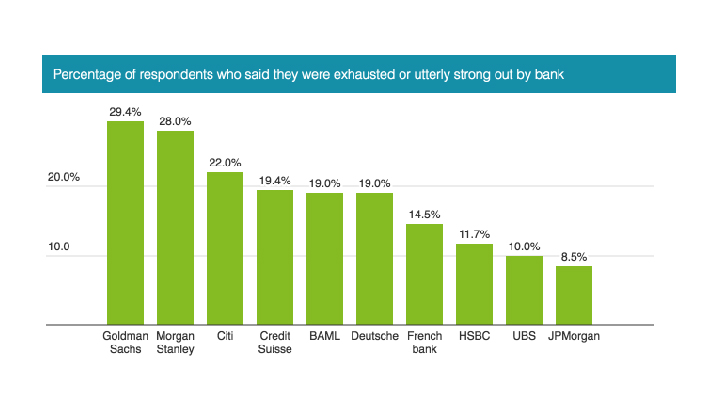