Euro 2020 on the Behavioral Alpha Frontier

The proprietary analysis we use with professional investors suggests some dark horses to watch in this year’s tournament.

Chris Woodcock leads the research and product teams for Essentia Analytics. Prior to joining Essentia, Chris was a technology analyst at GAM Investment Management and a hedge fund analyst at GAM Multi Manager in London. Before his career in financial services, Chris was a professional footballer with Newcastle United.

In working with professional investors, we frequently draw on insights from sports analytics to apply to our area of behavioral portfolio analytics. Not only are they relevant, but they resonate too — not least with yours truly, who in (what feels like) a previous life was a professional footballer.

After a delay of a year, Euro 2020 is now upon us, and in honour we thought we might do what we did recently with the National Basketball Association in the U.S.: apply Essentia’s analytics to the teams competing in the tournament starting this weekend.

What would the competing national teams look like on the Essentia Behavioral Alpha Frontier? 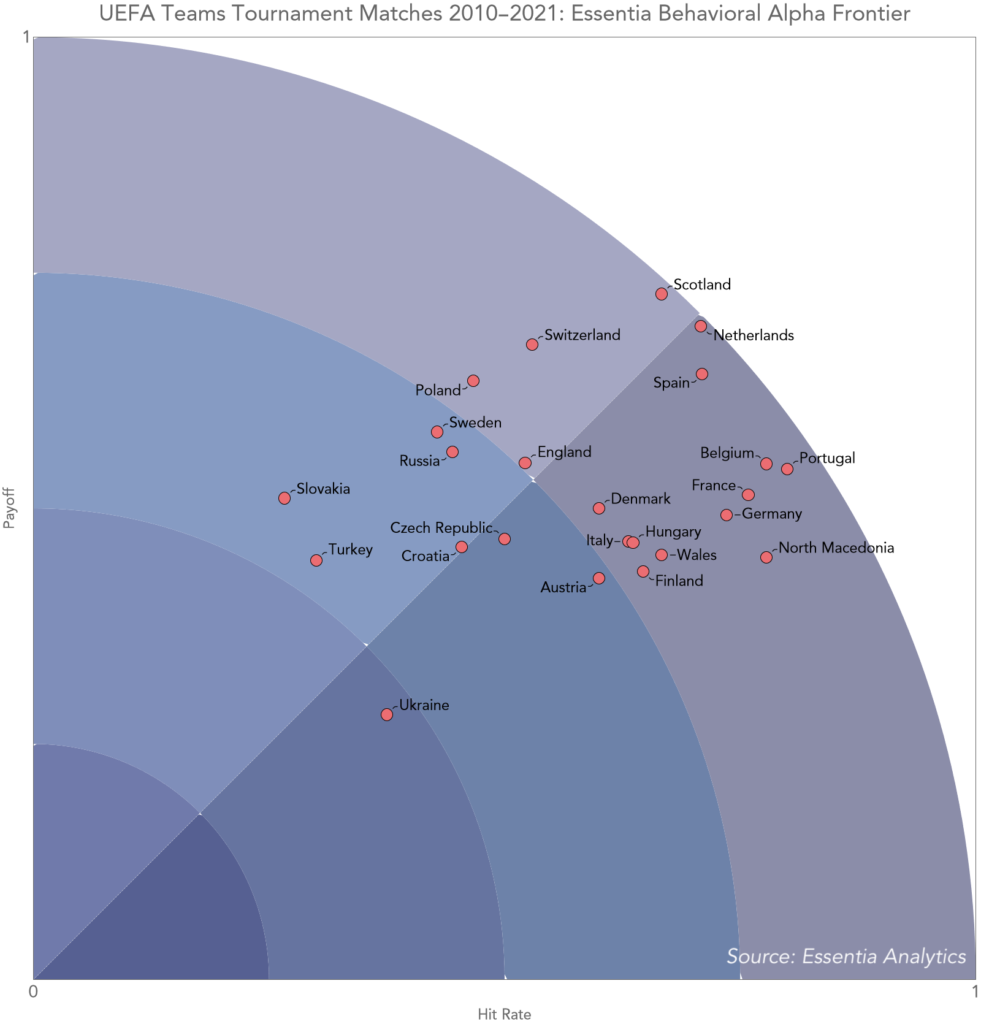 Our analysis considers Hit Rate (win-lose percentage) and Payoff (magnitude of wins vs magnitude of losses) of the teams in UEFA tournaments since 2010, and suggests a few unexpected teams to watch in Euro 2020.

Our proprietary Behavioral Alpha Frontier is usually used to map different investing skills using the measures hit rate and payoff. For example, perhaps a portfolio manager’s stock picking skill has a low hit rate but a high payoff: they don’t always get it right, but when they do, they get it really right. Or perhaps their exit timing skill has a very high hit rate but a very low payoff: they usually get out at the right time, except for a few extreme cases that impair an otherwise successful record. The Frontier allows different combinations of hit rate and payoff to be compared directly in a single chart.

(The sharp-minded amongst you will have spotted that raw payoff can range from zero to infinity. To put it on the same scale as hit rate, we can apply a logarithmic transform so it ranges from zero to one, which is what we do for our Frontier graphic.)

In U.S. sports, such as baseball, hit rate and payoff are very familiar. Hit rate is a team’s winning percentage, and payoff is roughly analogous to an individual’s “slugging percentage” (when you do hit, how big do you hit?).

For football, we can equally well apply these metrics. Hit rate should be intuitive — it’s the team’s win percentage over time. The best way to think about payoff for a football team is the average margin of victory when they win divided by their average margin of loss when they lose; teams with a high payoff tend to win bigger and lose smaller than their peers.

Why might this be interesting as we consider the Euro 2020 tournament? Well, if we look at tournament results since 2010 for the competing teams, it could reveal hidden potential for the upcoming matches, or historic good fortune. If you follow the dotted white diagonal on our frontier, there’s a sense in which we can say that teams to the right of that diagonal are relatively “lucky” in terms of their win-loss record when compared to their ratio of margin of victory to margin of loss.

They may have a stellar reputation based on a good win-loss hit rate, in other words, but with a low payoff, one can get a sense of the nature of that success: did they get there by swashbuckling winning performances (along with narrow losses), or by defending slender leads.

Plotting the results of all tournament matches since 2010 on our Behavioral Alpha Frontier, the keen eye will perhaps notice a few teams to watch in Euro 2020.

Switzerland have a decent win/loss record and tend to lose narrowly when they do lose, suggesting that with some luck they could go further than expected.

Conversely, watch out for North Macedonia, playing at their first Euros. Whilst they get well beaten when they lose, they appear to be capable of an upset. (Reinforcing the point, they recently recorded a surprising away win against Germany …)

It’s hard to ignore Scotland, too: they appear way further up the pecking order than expected. Most of their results have been in lesser tournaments, of course, but keep an eye out for something unexpected from them.

Some of the best teams of the last decade – France, Germany, Belgium, Portugal – all appear in a cluster with high win rates and relatively lower payoffs, perhaps suggesting a tightly disciplined approach to tournament strategy. From personal experience as an England Youth player, I know that going deep in big tournaments requires discipline, and these results appear to echo that.

And what about England? Bang in the middle: win some, lose some, play well, play badly: no wonder being a fan feels like such a rollercoaster.