Clare Flynn Levy talks to Annie Duke about the similarities in decision-making approach found between professional poker players and investors.

For two decades, Annie Duke was one of the top poker players in the world. She is a World Series of Poker bracelet winner, the winner of the 2004 Tournament of Champions and the only woman to win the NBC National Poker Heads Up Championship. Prior to becoming a professional poker player, Annie was awarded a National Science Foundation Fellowship to study Cognitive Psychology at the University of Pennsylvania. She now spends her time writing, coaching, and speaking on a range of topics such as decision fitness, emotional control, and embracing uncertainty.

I’m just going to say it up front: I loved Thinking in Bets by Annie Duke.

I’ve read pretty much every book out there that relates behavioral bias to investing, but this one’s a gem.

Yes, it’s about poker – but only sort of. It’s really about what top poker players do to continuously improve the quality of their decisions in the heat of the moment. It’s a great read, with lots of clear take-home advice about decision-making for non-poker players, including professional investors.

With this is mind, I sat down with Annie for a quick chat about some of the similarities between playing a great hand and making a great trade.

CFL: Annie, in your book, you make the point that “investing is poker, not chess”. Can you elaborate?

AD: It was the game theorist John von Neumann who first made the distinction that chess is a form of computation, not a game. That’s because, in chess, there is always a right way forward at any point.

Poker and, for that matter, investing, are different as they are each characterized by incomplete information and a significant element of luck. What’s more, valuable information is often hidden from the participants – something that’s not so much the case for chess where each player can see where the other’s pieces are.

As a result, in both poker and investing, you can make the best possible decision at every turn – given what you know – but still lose the hand or the trade because of luck or information you didn’t have access to.

CFL: You’re now retired from professional poker and spend much of your time working with traders as a performance coach. What similarities and differences do you find between them and poker players? 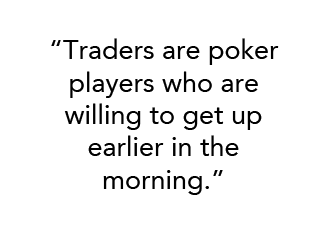 AD: Traders are poker players who are willing to get up earlier in the morning – other than that, they are pretty similar; they have similar mindsets and ways of thinking about probability. Both groups also often struggle to look in the mirror or move away from making decisions by gut.

I often encounter traders who push back against the idea of a structured post-mortem process that will hold their intuition – often a large part of their actual decision-making process – up to the light. They want their analysts to do that sort of objective, data-centric exploration around the decision to trade, for sure, but they struggle with the idea of doing it themselves.

For some traders, there’s also a fear that they will get less credit and be devalued in the eyes of others if they rely on something other than their gut when it comes to making decisions.

CFL: I see that amongst some fund managers, too. It reminds me so much of the concepts in the book New Power: It’s that old-school model where power is hoarded by the individual vs the dynamic we’re increasingly experiencing today, thanks to social media, where power lies with the many and is channeled toward one end or another. There are a lot of people in the investment management industry who aren’t ready to accept that the “old power” way, where fees are opaque and PMs are “stars” who don’t actually have to prove their skills on an ongoing basis, is dying. That doesn’t mean that active fund managers are going to disappear – just that the ones who succeed will have embraced the technology that makes success possible, in this new world.

AD: That’s so true. When I speak with traders, I witness a lot of concern around algorithmic trading. I think some of them are – often unconsciously – trying to slow down its adoption in the industry. But that fear is misplaced because, when I then speak with experts in the field of AI, I hear a lot of clear and valid skepticism about how much algorithms are going to be able to do on their own. Humans have different strengths than deep learning does, and those strengths are still inherently valuable to